Kitchen Nightmare of the Sriracha Sauce 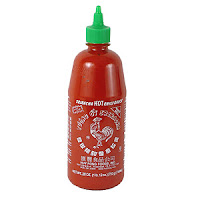 This is a cautionary tale for all of those husbands who complain to their wives that their chili ain’t spicy enough. Watch what you ask for when it involves hot sauce because it could land you a one-night stay at the hospital. The circumstances surrounding the event are still, and always will remain blurry, but doctors attribute what happened to my darling husband to too much hot sauce.

Pangasius with Cherry Tomatoes and Capers

A few months back, while killing some time at a magazine stand, I came across a special edition of Gourmet Magazine called Special Edition Italian Kitchen. It retailed at a whopping $12.99 +tx, which in my opinion is just a stupid price to pay for a magazine. But, oh my God. Every single recipe in there had me weak at the knees just by reading them. Yes, as I have mentioned before, I am addicted to any literature involving food. So I just couldn't resist, and had to have it, price being stupid, or not.

The first recipe I tried was called Black Sea Bass with Tomatoes and Capers, but I used pangasius since that's what I had on hand. It turned out so great, it became an instant family week-night dinner. On the picture here, I served the fish with a saffran pilaf rice, one of my favorite recipes by Pol Martin. This rice is so easy and delish, with grated parmesan tossed at the very end of cooking. Yum. I'll be posting this recipe in the coming days for sure! 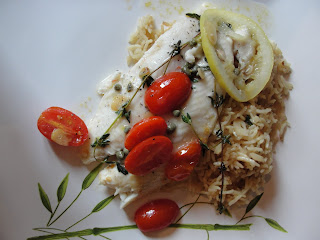 Pangasius with Cherry Tomatoes and Garlic
4 pangasius filets
8 thyme sprigs
1 lemon, sliced in 8 slices
12 cherry tomatoes, rinsed and halved
1 ½ tbsp capers, liquid drained
2 garlic cloves, thinly sliced
Your best olive oil
Salt and pepper
Pre-heat the oven to 400ºF.
First, prepare the fish. Remove any excess liquid from the filets by pressing them gently with paper towel. Line a baking sheet with aluminum paper, and spread 1 tbsp of olive oil on the foiled sheet.
Place the filets on the sheet with two lemon slices under each. Season the fish with salt and pepper, and place two sprigs of thyme on each filet.
In a saucepan, heat 3 tbsp of olive oil on medium heat. When the oil is hot, throw in the sliced garlic and cook until it becomes slightly golden. Now, add the halved tomatoes, and cook until they become softer, about 5-6 minutes. Add the capers to the pan, and cook for another minute or two.
Pour the tomato-garlic sauce as evenly as possible over the pangasius. With another sheet of foil, create a tent over the fish, and seal the edges by rolling the top and bottom foil together.
Put fish in the oven, on the middle rack, and cook for 13-15 minutes, or until cooked.
Enjoy!
Gourmet Magazine, Special Edition Italian Kitchen, May 2011.
Posted by Astere at 10:26 No comments: 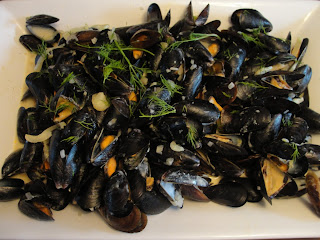 Every time my husband Marc and I go to Costco, we always come back with something we could have done without. So on our last trip there, Marc dearest came upon a 4.5 pound box of fresh mussels while wandering in the seafood isle. "Hey, it's only $10.99 for all this!", he said as if we had found some great bargain. I tried explaining to him that preparing mussels is a bit of an endeavor, and what you save in  money, you pay in labor.
Cleaning and scrubbing the shells, cutting and discarding the beards, checking to see which ones are alive (by tapping sharply on the shell to see if it will close), and which ones are not, rinsing them out, etc (and you haven't even started cooking them yet). All this screamed to the full-time working mother that I am ,"Time consuming! WASTE  of time. No time for these frilly dishes! Don't do it!!!"
But I have to admit I have a really hard time saying 'no' to trying a new dish, especially when my husband is getting excited about it. So, I agreed to humor my better half, and off we went with our Costco box of fresh mussels.
And what exactly did I make with these darling shells? Une mouclade, of course! A 'mouclade' is basically a French word to describe a mussel dish in a cream and wine sauce lightly spiced with curry and fresh fennel.
The mouclade recipe I used is out of one of my favorite cook books, L'encyclopédie de la cuisine méditerranéenne by Sélection Champagne (the original English version is called Mediterranean, by Lorenz Books), and I am taking back all of my this-is-a-waste-of-time arguments against making mussels. The results were just delicious, great for our family, and so worth the full hour it took me to prepare this dish. I totally encourage anyone try it!

1. Clean out the mussels, and discard the ones that don't open up when tapped with the back of a knife.
2. Add the wine, nutmeg, thyme sprigs, bay leaves, and onion to a large pot and bring to a boil. Add the mussels and cover. Cook for 4-5 minutes, until mussels open up.
3. Drain the mussels, reserving all of the liquid. Discard the mussels that have remained closed.
4. In a pan, melt the butter, and sautée the fennel and garlic for about 5 minutes.
5. Add the curry paste, and flour to the fennel mixture and cook for 1 minute. Remove from heat, and add the mussel cooking juices, a little at a time. Let simmer for 2 minutes, stirring constantly.
6. Pour the cream in the sauce, and add the black pepper.
7. Return the mussels to the large pot, add the sauce and cook for another 2 minutes.
8. Now pour everything onto a large enough serving dish, and top the mussels with fresh chopped dill.

We dipped slices of fresh baguette in the creamy sauce, and indulged in a glass of Muscadet white wine (which I also used for this recipe). Perfect pairing! And as for the quality of mussels at Costco, I have to say they were extremely fresh and clean, which helped cut down the prepping time by a lot.
Posted by Astere at 22:18 No comments:

It's never too late

Better late than never, they say. Well, it's been a long time coming, but here I am anyway. At long last, I have decided to give my passion a voice, a platform... and even perhaps a bit of therapy too. See, the love I have for all things edible borders on the pathological. Or perhaps more on the pathetic? Humm, I don't know... That's a tough choice. Either way, this obsession needs some form of outlet.

So here I am, about to start sharing so many of the ingredients, meals, dicoveries, recipes and memories that have been shaping my world, my whole life. Meals that have at times elevated my soul to the Heavens, meals that have caused me to think, "Why am I slaving over this dish exactly?", meals that have soothed my son's bellie, and other meals that have {unfortunately} sent my dear husband to the emergency room (long story involving too much hot sauce on a chili that was meant to be mild to start with, but I'll have to get back to that one later).

Food is so powerful. It moves people, it changes people, it makes certain moments forever engraved in our hearts. And talk about therapy, food is therapy sometimes. I know it is for me. Whenever I need to feel some love, I just start cookin'. Now, for my obsession on food, I'm not sure what type of help is out there. But I am starting here. On my brand spankin' new blog. And I can't wait to share all the things I am so friande of, or so very fond of. So here I go.

Astere
Hi! My name is Astere Justine Haile, and I am the end product of a French Canadian foodie mom, and an Ethiopian foodie dad. Yep, I’m a direct descendant of two foodies. Though I don’t have professional training in the culinary arts, spending many years watching my parents cook, and always encouraging me to try new things has taught me a thing or two around the kitchen. I’m a full-time working gal, mom of two amazing boys, and wife of a pretty great guy. By day, I work in the fashion industry. By night, I read, dream, think of, and try to make great food. I’m also a cook bookworm. I love reading about, and trying out new recipes. So this blog will be my “table d’essai”, my trial and error recipe platform, if you will. And I hope you’ll visit me from time to time while I experiment here for a bit. Bon appétit!